It's been a somewhat busy week here, surrounded by scraps. At least in the relative term. I was dragging my heels finishing up the binding on this fun set of placemats using fabrics from Farmdale by Alexander Henry. 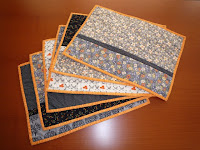 But the work paid off... the placemats sold through my Etsy shop within 36 hours of the posting! Somewhat gratifying as I am slowly getting that venue back up and running.

Also, as of today, I finished quilting my submission for the current Project Modern Challenge 2. Unfortunately I have to hold off on any photos until after the judging, but let's just say I am glad to be through with the quilting, though it is far from completion. The binding is going to be its own challenge! At least I have one month to work on that, including my 5 day excursion to the midwest in about 2 weeks! 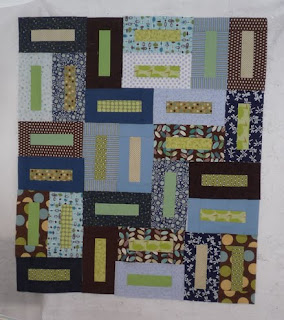 One of my more pressing projects for the last couple of weeks is this baby quilt, put together with the new son of one of my closest college friends in mind. Granted, I haven't seen her in several years, now living on the opposite side of the continent from one another, and never having met her husband (though hearing about him many years ago, the last time we met up), but for some reason I was compelled to make this quilt.

I also reached out and made some new blocks related to the Seams Perfect Bee on Flickr. I will post more about those in an upcoming post.
Posted by Linda Beth at 8:22 PM