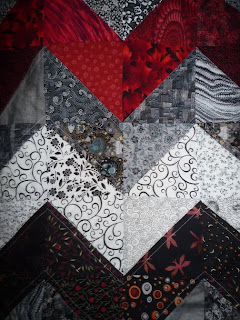 I finally finished quilting and binding a black, white and red quilt I've been working on as a wedding gift for some friends. The wedding was last summer, and the quilt was begun just around that same time, so (as I do with most of my quilts) I knew it ought to be washed once before gifting.

Though I made a point of prewashing all of the fabrics, also a common practice for me, I was wary about washing those reds and whites together, so I decided to test out the Shout Color Catchers. I have mixed reviews. 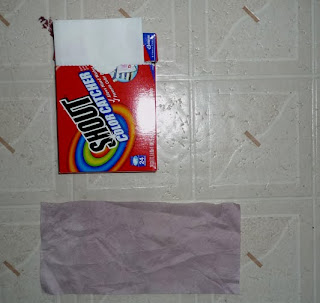 I put two sheets in the cold-water wash with the quilt, and as you can see, they certainly had some effect! And for the most part, the whites remained nice, crisp white. HOWEVER, there are a couple of places where red dye DID in fact transfer onto the other patches, especially where the white and red patches touch. I tried to photograph, but I suppose it's a bit too subtle for my little digital point and shoot camera to pick up. 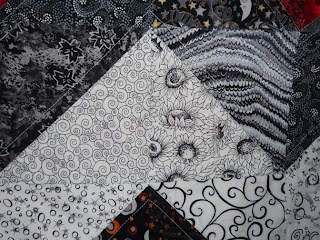 If you look closely (and squint your eyes and form a mental picture) you might be able to see a ghost of red in that triangle with the sunflowers. Bummer. I can only think that the dye transfer would have been much much worse if I had NOT used the color catchers... otherwise I'd have to kick myself for ruining my friends' wedding gift.
Posted by Linda Beth at 3:33 PM