Last week I came to the realization that I need more structure. Part of that process will be assigning different general projects to different days of the week. For instance, Tuesday is now a "merchandise" day, for making (primarily) place mats and pot holders: 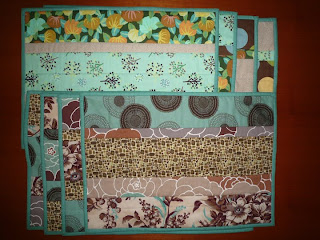 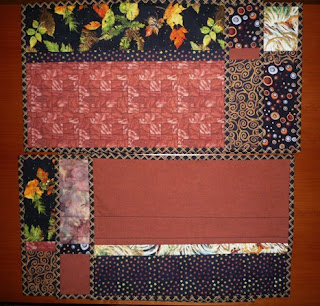 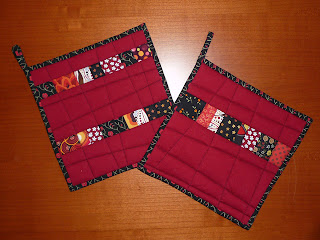 My new schedule allots Thursdays to working on bee and swap projects. Last week I worked on blocks for the do.Good Stitches bee on Flickr. Megan, a.k.a. Canoe Ridge Creations, posted a tutorial on her blog for a simple as pie bow tie block. 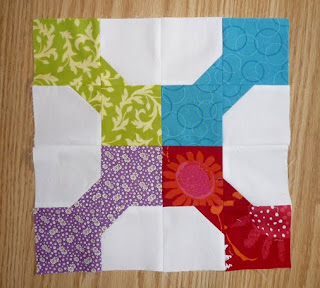 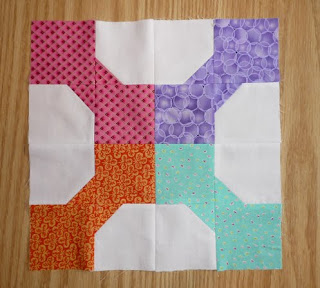 She showed us an array of clear, saturated, rainbowy fabrics as inspiration for the palette... which seems to be a trend right now. Not an unwelcome one, I must say.

In addition to the bow tie blocks, I dedicated quite a bit of time to cutting squares for the Warm Cool Quilt Along hosted by Jeni at In Color Order. I shared a little more about this process in my previous post, found here.

This week, however, I moved on to working on 2 other projects, one of which I thought the deadline had passed me by. The Portland Modern Quilt Guild is putting together a banner to represent the group at the annual Sisters' Outdoor Quilt Show in Sisters, OR, along with a selection of member quilts which will be on display at the show this year (the second Saturday of July, for those who are interested!!). Admittedly, I did not get the memo in time to submit (have I mentioned that I am terrible at keeping up with my blog list and online newsletters??) so I do not have a quilt in the show, but several of my Portland colleagues will, along with hundreds of other Oregon quilters! However, I did get a chance to do a block to be added to the banner for the guild, which I dropped off at this evening's meeting. 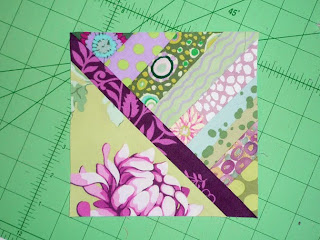 I kept going back and forth about what design I would want to use to sum up my quilting style in one 6" block, sketching ideas, but came up with this simply by revisiting my own Flickr photostream. I originally did a quilt from one of Judy Hopkins' books (whose name escapes me right now, I have to admit) several years ago as a wedding gift for some friends. 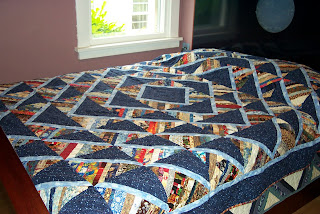 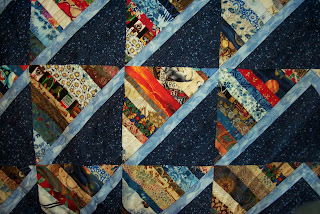 A perfect way to combine string piecing and working with an awesome modern focus fabric (and this piece of Heather Bailey's Freshcut I have Jenn, Sunnyauh to thank for!!)

But the bulk of the day was dedicated to working on Cruz's blocks for the Seams Perfect Scrap Bee on Flickr. She pointed us toward this tutorial from Freshly Pieced. 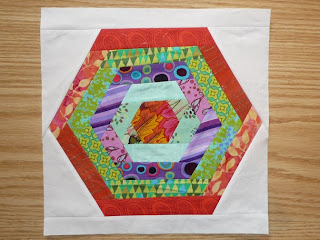 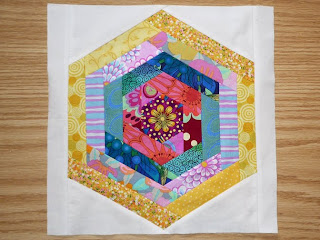 I LOVED working on these blocks, though was thrown off by how long it took to actually select each round of 3 fabrics! And I do have to say that it was a challenge to keep my hexagon blocks even as I went around, as can be seen by the wonky angle of a couple of the strips, but hopefully it won't make too much of a difference. Next month is my month to host that bee, and I still have to get my sample blocks and templates together before the end of June, as I think I will have to send out bits for paper piecing... more to come on that one later. All in all, I think this will be a good schedule to keep to, assuming I am able to keep to it!
Posted by Linda Beth at 10:03 PM