About a week ago partner assignments for the second For the Love of Solids modern sewing swap on Flickr were sent out out. They had been eagerly awaited by many, many crafty Flickr users, myself included!

One of the first steps to being a part of one of these virtual swaps is to make up an "inspiration mosaic": a composite of many other craft projects to point your swap partner in the right direction. My mosaic for this particular swap was: 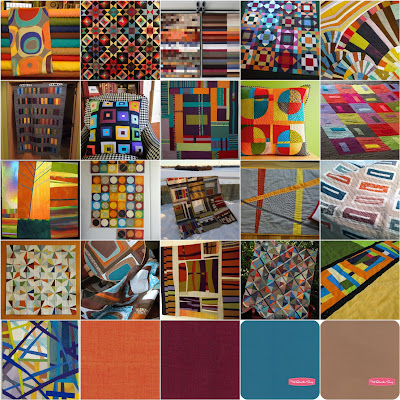 The individual credits for each of these pictures can be found in my Flickr photostream, at this link.

There are apparently a couple of different sources for putting together these mosaics, but I've always had good luck using www.bighugelabs.com.

When the partner assignments go out, the stalking begins! That's the fun part, don't you think?? Gleaning clues about your secret swap partner, their likes, dislikes, desires, what they write in their own blog if it's out there. And thankfully, my partner has plenty of info for me to work from! However, it took me a little while to really get rolling.

I had a couple of days of work in there, then a day with a very specific sewing goal followed by... close to 4 days of being wiped out by some stupid stomach bug!! Dumb flu messing with my fun, stalking design plans! That said, I'm a bit behind in the color gathering stage, but got a chance to pull some pencils together while gazing at my partner's mosaic 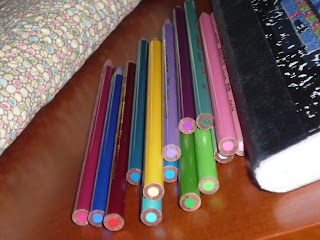 and work on a couple of sketches 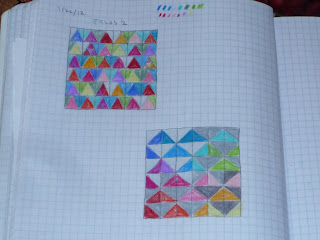 Tomorrow I'll be back at my studio for the first time in nearly a week, play around with some of the fabrics in my stash, then fill out the palette from Marie's awesome selection of solids at Cool Cottons. That should also give my secret partner plenty of time to chime in on the discussion threads of the Flickr group (some of which she already has... so it *could* still be any of you!). I'll try to keep up on posting progress over the next month or so.
Posted by Linda Beth at 6:00 PM

Labels: Cool Cottons, For the Love of Solids, palette, swap