At our last PMQG meeting, Michelle of Design Camp PDX gave a fabulous talk and demonstration on improv piecing, inspired by a class she attended with Denyse Schmidt and projects she's pursued since then.

One of the visual examples she brought to the meeting were blocks constructed by members of the guild at a sew-in exercise a month or two prior. 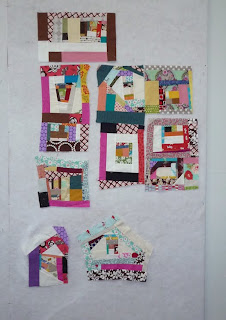 Not having been at the sew-in when these guys were originally made, at the end of the meeting I volunteered to "inherit" the blocks in order to piece them together into a quilt top that will then be quilted by Nancy of Just Quilting, and donated to the guild's chosen March charity organization, Quilts of Valor.

They have now been up on my design wall for the better part of the week, and I still have not approached them. For various reasons, mind you, but I KNOW that when I take them down and set my scrap baskets by me it will be hours of madness! I think the good kind of madness, not angry or frustrated, but madness nonetheless. I've been needing some clean finishes first, I think. And thankfully, I currently have 3 small binding projects at home with me for the next few days, then I might be ready to dive into the scraps!
Posted by Linda Beth at 10:21 AM