A couple of weeks ago I wrote a blog post on some EQ7 mockups of a new pattern I've been working on. I got an overwhelming amount of encouragement for a particular colorway I showed, which was especially exciting since I had already begun pulling fabrics to work on that version.

And though I haven't had a whole lot of time in the sewing studio in the past week, I did manage to finish piecing the blocks for this, and got them all arranged on the design wall ready to put together next time I'm in the area. 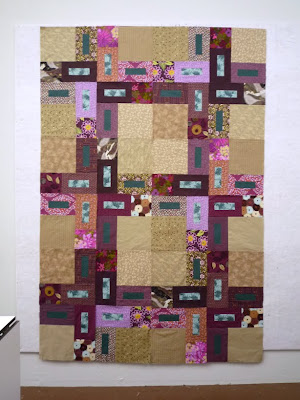 In addition to this project, I've been working on arranging and/or completing a couple of bee quilts I have going. The first order of business is putting together a back for my green and brown spiderweb quilt, made last year by the members of the Seams Perfect flickr bee. I had a few orphan blocks left over which I'd like to add on the back, as well as the signature blocks done by the other members of the bee, so it's on its way to being a very scrappy looking backing. 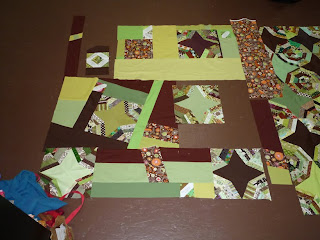 And though this is just getting underway, I started playing around with the blocks I've been getting back from last month's Design Camp 2 Improv bee. One general arrangement so far is: 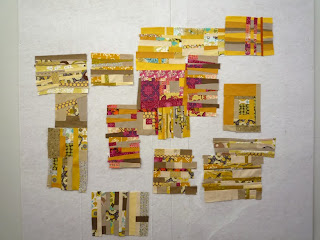 There's obviously a lot more work yet to happen on this one, but I'm having fun playing around with it and looking forward to working it out over the next few weeks (or however long it takes)!