About a year and a half ago I posted a photo of an "upcoming project." 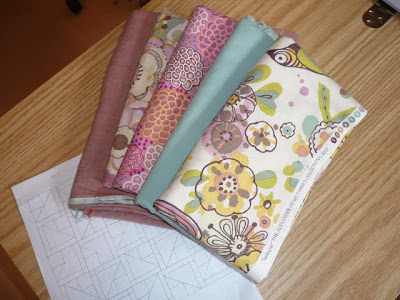 Last Friday I was in the studio putting away some fabric yardage on the shelf and it occurred to me that of late I seem to be doing projects that either use scraps almost exclusively or are placemat sets that had been decided for me a while back. I don't feel like I've been taking advantage of my actual stash! And it's a sizable one, in dire need of being whittled down and put to good use!

I also realized that I've kind of veered away from some of the designs I've thought of doing over the last couple of years - things I played with in graph paper AND EQ7, like the project pictured above. Maybe it's time to revisit some of those older inspirations that got lost in the shuffle. Have any of you had that feeling - you've moved forward with things and have been making stuff that you're happy with, but looking back realized that there were projects you considered but hesitated on and then forgot to get back to??

So I pulled open my little wire basket with that same stack of fabric neatly folded together along with that same piece of graph paper, but as I looked at the pattern I was less inspired. Plus, I couldn't even remember which fabric I had envisioned in which position, which to me says it might be time to reconsider. I've been wanted to do another Blooming 9-Patch and these fabrics seemed to be a great starting point!

I started with those focus fabrics, Larkspur from Alexander Henry, plus the Kona Solid and Shot Cotton and an Australian print I had grouped with them originally. To those I added just 4 more fabrics to round out a nice progression for the alternating 9-patch and plain fabric blocks: another Alexander Henry blender from about a decade ago (one I've used in bits and pieces in MANY quilts over the years!), a batik I bought and used in a Trip Around the World variation I made for my father in 2005 or 2006, a coveted Joel Dewberry print from his Modern Meadow collection and a perfectly coordinating Anna Griffin print also from years ago. Did you notice that? Using fabric I've had for years and coveted fabric?? That's something to be proud of, yes?


I got all of these together at some point on Friday, with enough time to get everything except the setting triangles cut out, and began piecing the 9-patch blocks. When I left the studio, it was starting to look a little like this: 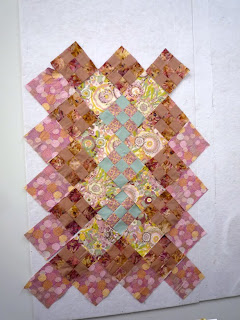 By Sunday I was rarin' to get going again on this puppy. My friend Maria came by the studio for a sewing day together, and while she was playing around with a stunning new quilt from Elizabeth Hartman's newest book Modern Patchwork, I continued on my 9-patch journey. By the end of the day I had all of my diagonal rows pieced together! 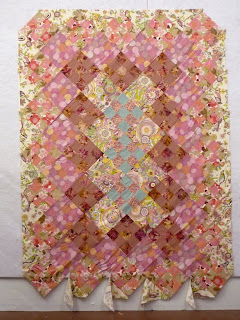 My next day in the studio is Thursday and I am holding myself to high standards to finish piecing this top by the end of the day. Will I be able to do it?? That's a fair number of corners to match up...
Posted by Linda Beth at 5:48 PM