So, in my previous post I gave a little hint about some birthday gifts for this week (which admittedly became just one single birthday gift, with something waiting in the wings). Of late years, my friends and I rarely exchange birthday gifts beyond maybe a bottle of wine, a dinner out, or some silly token if at all, but yesterday was a milestone birthday for one of my closest friends here in Portland - the first friend I made after moving here 11 years ago, in fact. She loves throwing parties, baking, board games and for nearly as long as I've known her she has one consistent (if somewhat facetious) request for her parties, "Feel free to invite any firemen you might know!"

As far as I know I never did see any firemen at these get-togethers, but that was gonna change this time around! Maybe not as exciting as she had envisioned, but darnit I decided to bring her some firemen! 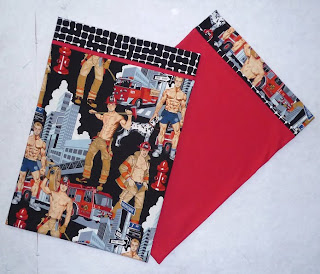 I think this surprised her new man, but he took it in stride ;-) Perhaps I should have offered him the camping centerfold version... maybe when his birthday rolls around, we'll see (or maybe I'll have to save that one for J to go with the camping babes flannel quilt his mom made him many years ago!) 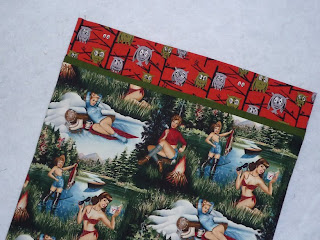 For some reason my response time on bee blocks has slowed down tremendously over the months. I think earlier this season I actually was late on 2 different bees. I don't think I'm alone in this at this stage, but it is certainly different from how I started out on these guys. This month I got in just under the wire for Bri's block in the Friends + Fabric Bee. She asked us to make improv blocks using only solids, inspired by this quilt from Ashley of Film in the Fridge.

A gorgeous inspiration, wouldn't you say??
So, as I was working on a few other things over the weeks I was weeding out all of the scraps of solids I came across. Finally yesterday I took the afternoon and sat down to attack that pile, small cutting mat and rotary blade to my left, Cut 'n' Press and iron to my right. 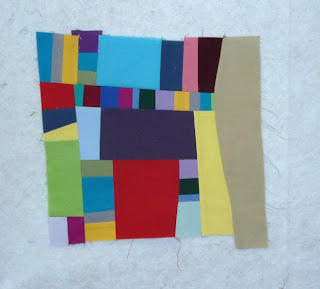 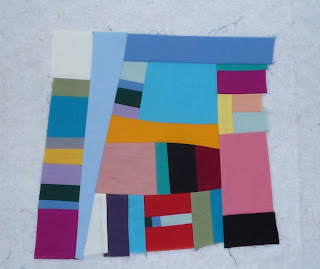 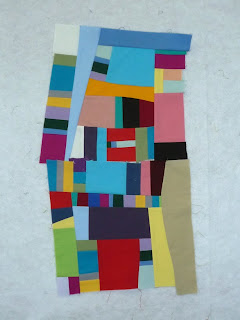 I actually enjoyed this process much more than I thought I would (though it did, obviously, take me a few weeks to work up to it), and in fact was struck with the idea to make a baby quilt kind of like this. How fun and cool would that be?? I'm on the fence about using only solids - we know I do like my busy prints! I might play around with mostly solids, throwing in just a few tone-on-tones here and there to add another dimension, but let me tell you I'm excited by the prospect, so thank you Bri!
Posted by Linda Beth at 8:46 AM