Bringing order from chaos, turning one thing into something else entirely, where the sum of two parts is most definitely greater than the whole.
Taking this: 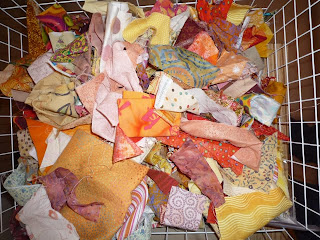 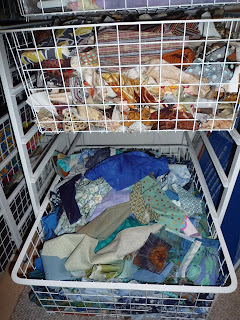 and turning them into this: 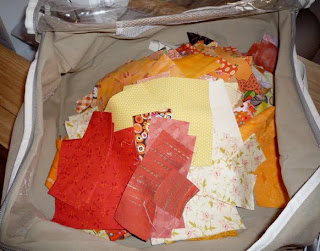 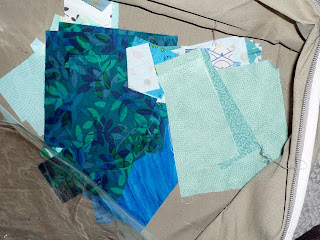 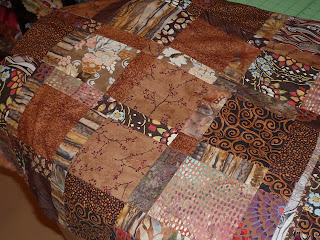 pretty much only takes stamina and determination (and very, very basic math skills).

A couple of years ago I made this quilt, based on a pattern in the Laurie Shifrin book, Batik Beauties, called Modern Mayhem. 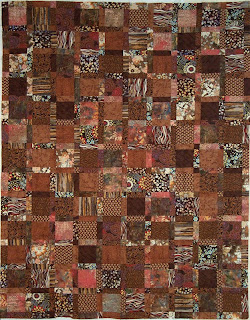 I chose to adjust the measurements slightly, bringing the scale to a more approachable one in my opinion, and just CUT. From there I took the approach of drawing a name out of a hat, but instead of a name it was a fabric piece, and instead of a hat it was a box top. And I have to say, I have been very happy with the results - so much so that I decided a while back that this would be my formula for all of my smaller (but not miniscule) scraps. However, like washing the dishes just after preparing and eating a meal, it is not the easiest thing for me to trim my sewing scraps AS I use them. Instead I let them collect, keeping them in the wire baskets sorted by general color, and every so often get the urge to spend an entire afternoon cutting them down into just 3 basic sizes, awaiting the time when I randomly reach in and start piecing another of those scrappy quilts.

So, here is my oh-so-simple formula: 5x5, 2x5, 2x2. Beware, it is NOT a charm pack and a jelly roll. I suppose it could be, but for some reason I prefer the slightly smaller scale for the sashing and posts.
And here is my process:

Begin with a fabric scrap at least 5" square 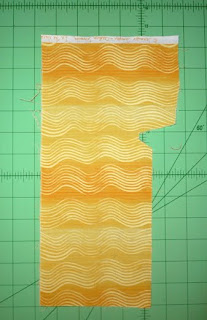 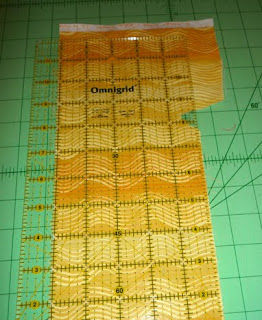 Cross-cut to make as many 5" squares as possible. Once the remainder is too narrow for that (or there's a divet cut out from a previous project which gets in the way), switch to cutting 5"x2" rectangles and 2"x2" squares (for sashing strips and posts respectively) 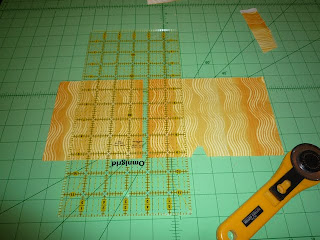 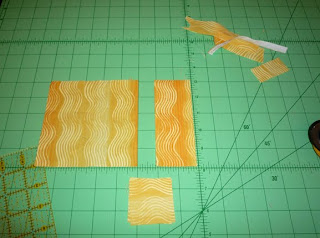 And of course we all know that we have lots of viable scraps that do not start at 5" wide, and for those, just jump straight to the 2" components (which we'll be needing many more of in this case, anyhow): 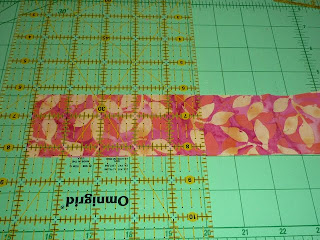 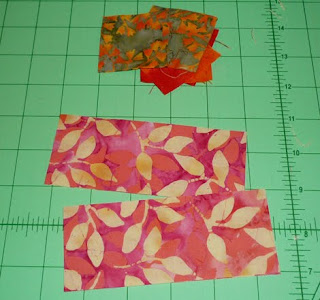 Once enough elements (and please don't ask me to define "enough" because I apparently haven't figured that one out yet, even for myself!) are cut, I say just throw your hand into the big mess, come out with 2 differently-sized pieces at random, match up the edges that are the same dimension and start the chain piecing! It is one of my goals to start making a scrappy, single-color (as in same color family, not STRICTLY single-color) quilt from each of my half a dozen color-coded scrap bags. Just a few more scraps to cut down, first... then hopefully more quilts in this direction: 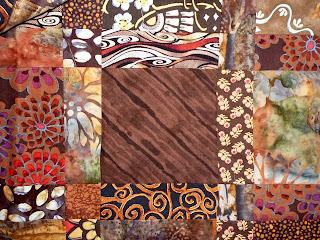