Ever have one of those weeks (or months) when you seem to be pulled in several directions at once, but then you look back and can't figure out why, or what might have gotten accomplished? The last few weeks has been kind of like that for me. One of the things to end up on the back burner here was my project for the I *heart* the '80s Swap. But a few days ago a "check-in" discussion thread was posted, to assess who was still actively involved in the swap, and make sure people are on schedule for the August 1st mailing deadline. That was kind of a wake-up call for me.

I've been working on a rainbow sampler, each block an icon or imagery associated with that decade, or our experience of that decade. I've now got all the blocks EXCEPT orange (though I have had in mind what I will do for that one since the beginning - just a matter of getting the right materials for it). Here's where I'm at: 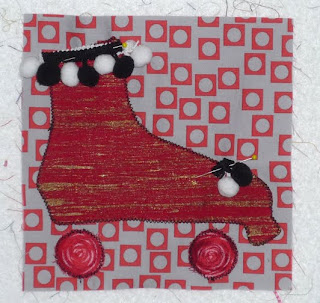 imagine this without the pom-poms along the top... just the ones by the "laces" 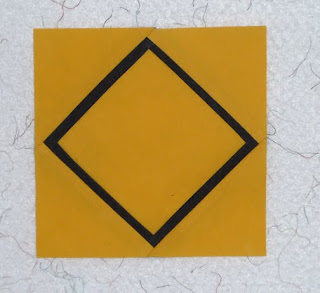 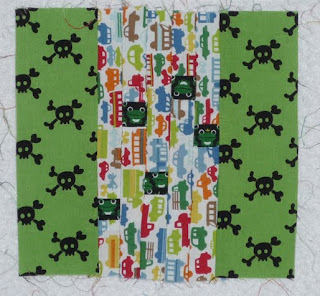 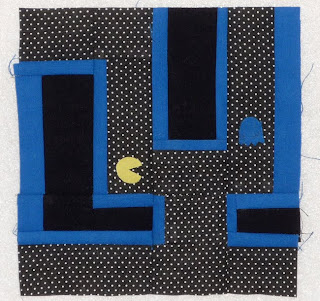 this one needs no explanation, I hope ;-) 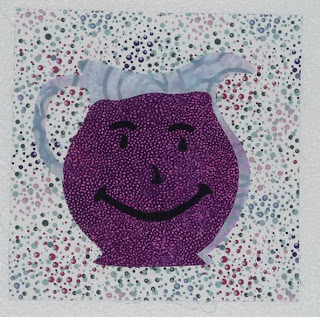 and though this isn't specifically an '80s icon, most of us (my secret swap partner included) were still relatively young during that decade, and what little kid didn't love seeing this face??

The Pacman and Kool-Aid blocks were my first attempts at using Wonder Under. Might be one of my last, too. I've had a little experience with Steam-a-Seam, but tend to stay away from the fusible webs in general. However, at this scale, the applique bits needed it. I should have stuck with what I know, though - the Wonder Under was nearly impossible to separate from the paper backing once I had fused it to the applique piece, even after I had tried to separate the two in advance. That's why my little ghostie is looking worse for wear (and he was not the first ghost I cut out, either). Lesson learned.

I've started playing with settings and layout, but I'll have to wait until I do ORANGE before I settle on anything. So far, this is where I'm leaning: 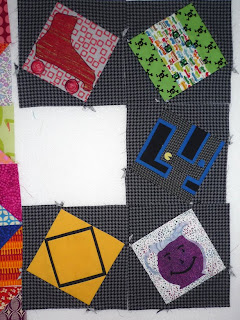 Now for the extras!! 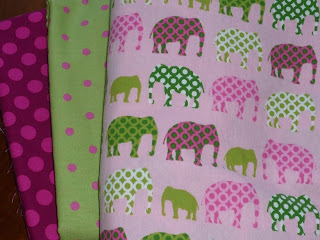 I'm keeping it a secret what this will become, but I hope she likes it, and won't be too embarrassed to carry it around. I found the adorable pink and green elephant fabric at Jackman's Fabrics on my last visit back to St. Louis, and it screamed out to me for this project! And just yesterday I picked up the coordinating dots when I went in to work at Cool Cottons, with the help of Marie. Just need a couple more things to get this piece under way.... 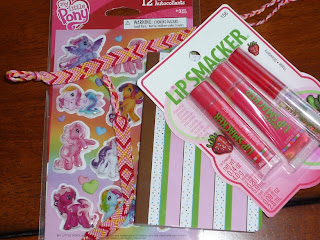 and then there are just the fun little goodies. We'll see if I come across any others before the package is ready to go out. I'm glad to say I feel a little bit more on track than I did just a week ago. I'll be cutting it close with my dad's visit coming up and some of my other obligations, but August 1st is a doable date now.
Posted by Linda Beth at 9:33 AM