For the last few weeks I've been amping up for some family visits during this month. Nothing stressful, just a great excuse to do a more thorough house cleaning than I tend to do just for myself and J. The first of those visits was brief, but extremely enjoyable! My brother, Lee, and his beau, Glenn, flew out here from NYC the night of July 4th, arriving a little after midnight. I wish I had a link to some video that Glenn took during the flight - a solid minute or two of constant lightning flashes (which apparently was actually going on for a good duration of their 6 hour flight!) They also got to see a couple of east coast fireworks displays from an uncommon vantage point! Again, I don't have access to any photos that they took, but thought I would link to some great fireworks photos my friend Connie captured from the Hudson in NY/NJ at her Flickr page here and here.

Day one of their visit found us tooling around Portland, doing some "must dos," like visiting Powell's Books and Music Millenium, walking around the Pearl District, and of course trying some home-brewed beer! Day two, on the hottest day so far this year, we drove just 30-40 minutes outside of town to do a day hike in the Columbia River Gorge. We chose to go up to Triple Falls, part of the Oneonta Trail, just a bit further east from Multnomah Falls. There were definitely people on the trail, but nothing compared with what I imagine Multnomah Falls would have been following a holiday weekend! 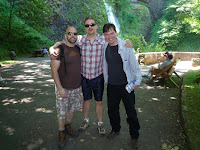 Lee, Glenn and J at the trailhead 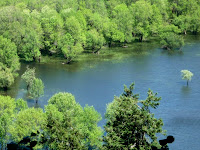 getting an idea of how wet the spring has been... water levels are HIGH on the Columbia! 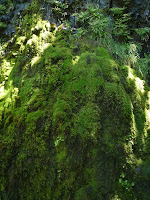 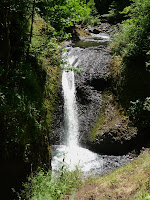 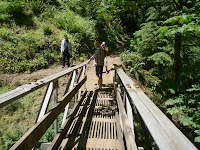 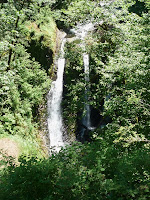 The three of Triple Falls 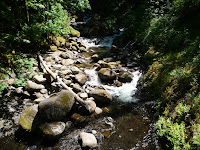 We spent about 3 -3 1/2 hours out there, then made our way back to town for a relaxing afternoon and evening at home. J made one of his fabulous spinach lasagnas and a couple of bottles of wine were opened, some Science Network on the TV, and there were 4 happy campers.
Posted by Linda Beth at 3:20 PM