Keeping in line with the theme of pulling old projects off the shelf of oblivion, I surprised even myself this afternoon! The earlier part of the day was spent crossing a couple of smaller items off my list, including getting those star blocks pieced together in a finished top: 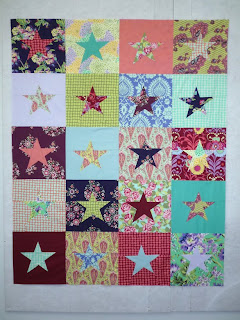 which, to be fair, looks very much like the photo of the individual blocks displayed on the design wall, found in this post.

And then I took a lunch break, and maybe enjoyed an adult beverage, too;-) So, coming back to the studio I spent some time at the ironing board pressing new fabrics and regrouping. But I was not ready to dive in to one of these new projects just yet.

So, where does that leave us but finding a NOT-SO-NEW project! I don't know if any of you remember these? 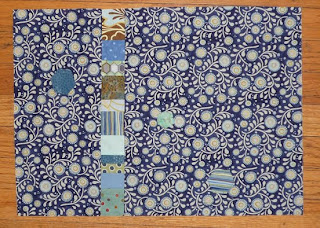 a false start I had on that placemat commission that ended up looking like this. Though I had decided that this wasn't right for the client, I still like 'em, so I stowed them away for a bit.

One of the issues that had come up initially is that one of the placemats ended up short. And I didn't have enough of the focus fabric to scrap the large piece and cut a replacement. So, what does one do with 2 discarded placemats, one of which is too small to be useful as such? Why, cut them into a pair of pot holders, of course!! 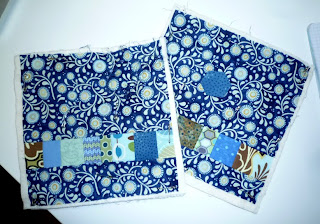 As for quilting them, I went against the grain (no pun intended). For pot holders I generally use a simple, straight line quilting, because let's be realistic, no one cares how fancy the quilting is on the tool you're using to pull the casserole from the oven, right? But this fabric gets me every time! I was drawn in by the little vines and leaves on the print, and it evolved into an actual feather quilting motif! Who'da thunk it? 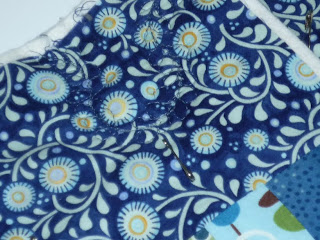 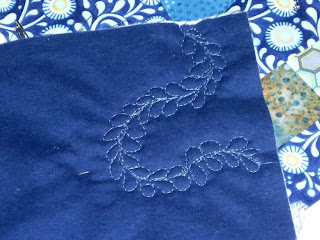 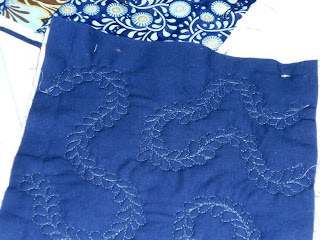 And can you believe this was my first foray into free-motion quilting on the Bernina?!? Though I prefer my trusty Viking in SO MANY WAYS, I do have to concede that this machine handled Beautifully with FMQ!! Not even any tension issues on the bobbin thread, which I find inconceivable! However, that said, these might not be so practical as pot holders any more! Just one of the sacrifices we'll make to push our creativity, I guess.
Posted by Linda Beth at 9:09 PM