Finding my way back

The trip was excellent, and I'll be posting more photos in the coming days, but now it's time to get back to the sewing room.

I spent my first day back in the studio catching up on all of my April bee blocks — and redoing the one I had actually put together before the road trip.

Friends + Fabric [AMSB]
April is Karen's month, and she wrote a stellar tutorial for making up a variation on a quilt she made previously, seen here. 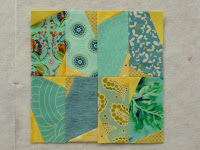 My first try... at a glance looks good, but I put the rectangles together backwards. That'll teach me to follow a tutorial after only printing out the first 2 pages, preparing for sewing without access to my computer, but wanting to save paper!

So, I began my work today picking out stitches while re-watching an episode of Greek through Netflix. 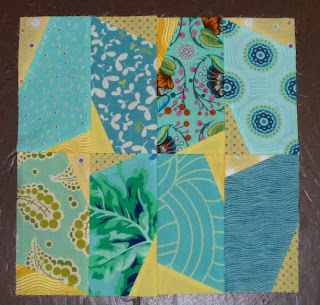 Hopefully with the right orientation this time! 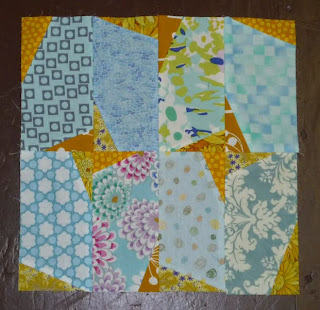 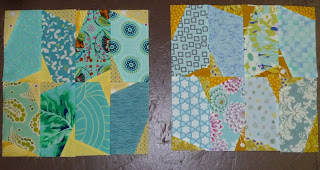 Seeing the two side by side gives a great view of the value contrasts (which is something Karen was looking for in these blocks and will make a stunning, stunning finished quilt!)

Design Camp [think outside the block]
This is an improv swap with a relatively loose format, but this month Mary gave us some guidelines within which to work. She sent out packets with strips of yummy autumnal Kaffe Fassett and Philip Jacobs prints along with some Kona Butter solid and a strip of one other solid. She shared a tutorial for making up chevrons (or french braids) to be encorporated into the blocks, but left the overall layout up to each of us. 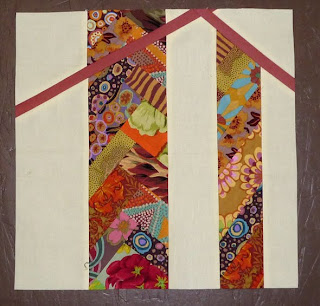 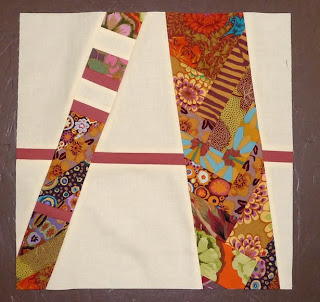 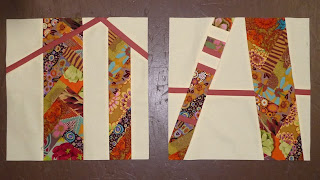 do. Good Stitches - Bliss Circle
This year seems to be starting off with the representational blocks for this group! Marian pointed a tutorial by Heather of Olive and Ollie for these sweet little house blocks. 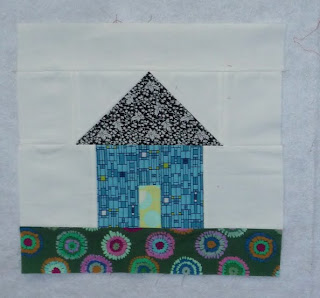 I was going for a little mid-century masonry and an ivy covered roof on this one! 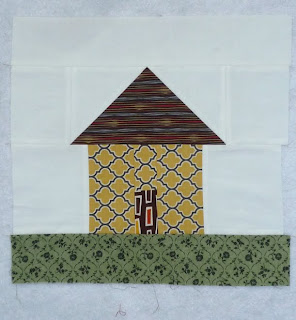 I love how the pattern on this Joel Dewberry fabric looks like we're peering through a beautiful ironwork fence!
Unfortunately, these blocks didn't end up exactly the target size, but thankfully Marian is being super flexible about it! And on these guys my problems with pressing all of these seam allowances open is much more evident than in the other bee blocks for the month. I can certainly understand the benefit of that technique in bee blocks, but it's not always the most efficient method.

All in all I think today went pretty well, and as an added bonus, I got to finish it off by meeting a friend for dinner at Ya Hala, a spectacular Lebanese restaurant in SE. And now I am {enjoying?} a pretty intense film that keeps drawing my attention away from this post, "The Bang Bang Club," about a group of photojournalists in South Africa in the mid-'90s. Holy _ _ _ _! Worth watching, to be sure!
Posted by Linda Beth at 11:11 PM